Scrae and Jack are demons from a high fantasy world called Verold, where powerful evil creatures have heavily influenced the history of mankind.  Both have abandoned their responsibility to their kind and have spent the better portion of their long lives terrorizing mortals for fun.  They found themselves in Cross after having a banishment spell cast on them.

Hair: Bright red, with orange-to-yellow tips.  His hair is straight and shaggy.

Other: Scrae has a large pair of curved ram's horns and long, pointed ears.  He also sports a pair of bat-like wings and a short, twisty tail.

Markings/etc: Scrae has a long, thin scar across his throat.

Clothing: Depending on who he's pretending to be, he could wear just about anything.  He tends to imitate the clothing style that he sees others wearing.

Brawling: Creatures like Scrae usually use trickery to avoid fights, but Scrae likes a good tumble-when he's sure he can win.  He prefers hand-to-hand combat, and has a rough and violent style that takes advantage of his natural teeth and claws.  He's surprisingly tough, considering that he has no visible armor or defenses other than his horns.

Charismatic: Scrae can be charming and is an adept liar.

Shapeshifting: Scrae can change to another humanoid shape at any time, and keep that shape for as long as he wants.  Most often, he'll use this to appear human (with no wings, horn, tail, or green skin).

Low level telepathy: Scrae has the ability to pick up surface thoughts from people who are nearby.  This is mostly used by his kind to help them determine a form to shift into that will allow them to better trick their prey.  Because of his closeness to Jack, he's also able to use it to communicate feelings and very basic impulses to Jack.  He can't penetrate the thoughts of anyone who is actively trying to prevent having their thoughts read.

Charm: When under Scrae's charm, people instantly see him as a trusted friend, and everything he says seems like a great idea (as long as it's not too unreasonable).  His charm can be resisted if someone is strong-willed enough.  The charm is so powerful, that charmed creatures will still have warm, fuzzy feelings about Scrae for days after he's charmed them.

Deadly Kiss: When Scrae kisses someone, he drains energy from them.  This energy boost not only feels great to him, but it helps keep him hearty and healthy.  However, it leaves the person he kissed sick and weak, and enough kisses will kill them (though very strong and healthy creatures may be able to prevent the energy drain).  Each time he kisses someone, they feel a great desire to keep kissing him (unless they're strong-willed enough to resist, and actually want to resist).  Scrae is not able to turn any part of this power off.

Tongues: Scrae can understand any language spoken to him, and can speak in any language (though only one language at a time).

Outcast: Scrae is considered an outcast by his own kind (demons in general).  Demons and other infernal creatures recognize him as a pariah on sight, even if they aren't from his world.

Addict: Scrae has an addictive personality and enjoys alcohol, drugs, and anything else he can get into his system.  He doesn't have to worry about most negative health effects (like his liver function), and is more likely to be inebriated than not.  This leads to poor judgment.

Good and Cold Iron: Scrae is vulnerable to good/holy things, and cold iron.  Both burn, and he cannot resist damage done by weapons or magic related to these.

Personality: Scrae is incredibly cheerful and friendly for a demon.  He is evil, but he's not really committed to it.  He enjoys corrupting others by encouraging them to give into lustful temptations.  But his main goal in life is to enjoy himself as much as possible, whether it's through sex, food, drink, fighting or whatever other entertainments he can find.  He rarely takes anything seriously, except for his complete devotion to his brother.

Hair: Long, black hair.  The sides of his head are shaved, as with a mohawk, but the hair isn't spiked.

Other: Jack has large, black-feathered wings, often held close to his body in such a way that some mistake it for a cloak at first.

Markings/etc: Jack has several tattoos and piercings. His tattoos are black flames on his arms and legs, and a tiger face on his chest (the Black Tigers was the name of the regiment of demons he served with).

Cothing: When he first arrives in Cross, Jack is wearing black leather armor.  He has a simple tunic and leggings that he wears under the armor.

Basic melee weapons: Jack can use just about any melee weapon, but prefers his longsword.

Ranged weapon proficiency: Jack can use most any ranged weapon (not modern weapons), but prefers his flaming composite longbow.  He is an excellent shot.

Tactics: Jack was a professional soldier and is more likely to come up with a thoughtful plan of attack than his brother.

Flying: Jack has wings too!

True seeing: Jack sees things as they actually are.  If someone is using an illusion, invisibility, shapeshifting, or other magical means to conceal their true form, he still sees their true form.  It doesn't let him see through  mundane disguises or camouflage, though.

Fear aura: Jack can radiate a five foot aura of fear at any time.  Any creature in the area must have a very strong will to resist the aura, or it will become panicked.  Even those who can resist the panic will still be shaken for a few moments.  However, if the aura is resisted, then they are immune from it for a full day.

Pyrokinetic: Jack has the ability to create and control flames.  He can only control the flames within a 100ft radius of himself.  If the flames go out of his range, they still exist, they just burn out of his control.  He is also immune to fire.

Magically tough: Besides being immune to fire, Jack cannot be harmed by poison and is resistant to damage from normal weapons.  He is greatly resistant to spells.

Tongues: Jack can understand any language spoken to him, and can speak in any language (though only one language at a time).

Outcast: Jack is considered an outcast by his own kind (demons in general).  Demons and other infernal creatures recognize him as a pariah on sight, even if they aren't from his world.

Addict: Like his brother, Jack has a very addictive personality.  His drugs of choice, however, are cigarettes and pain.  He chain smokes, which has no health consequences, but if he doesn't get a smoke at least every hour, he becomes even more irritated and moody than usual.  If he goes several hours without a cigarette, he begins to get headaches, shaky hands (affecting his archery), and has poor judgment.

He loves causing pain, but enjoys experiencing it too.  His pain threshold is so high that he will keep fighting even when it's long past time to retreat and is likely to start fights that didn't need to happen.

Personality: Jack takes evil very seriously.  He revels in death and destruction.  Though, he enjoys a good party as much as his brother.  He is quicker to anger, less willing to use guile when dealing with enemies, and more likely to go for the kill in a fight.  Despite his prickly personality, Jack loves his brother dearly and will do anything for him.  Scrae's influence is the only thing that keeps Jack from causing trouble at any given moment.

Jack and Scrae have been together for several hundred years.  Though not actually brothers by blood, in their home system, they were sometimes called the Black Brothers by the mortals they once terrorized.  They embraced the idea of brotherhood, and continue to call each other "brother," though their relationship is definitely not appropriate for siblings.

In reality, Jack and Scrae belong to different races of demons.  The Erinyes serve as soldiers, body guards, and assassins for powerful demons that have controlled their world through it's known history.  Succubi were generally kept as slaves by those more powerful demons.  Scrae escaped his master to live and play among mortals.  Eventually, he started to miss the company of his own kind (mortals just can't keep up with him, and have the unfortunate habit of dying at the slightest thing).

Jack was the standard sort of enforcer for a prince (that had gained his power by serving demon masters), until he met Scrae.  Though powerful, he was ultimately unable to resist Scrae's charms, and was convinced to turn away from his duties and be a fugitive with the Succubus.

Since then, Scrae and Jack have had to be careful to avoid their own kind, though they don't have a problem with fighting and killing other demons when necessary.  In their system, the brothers became commonly known in human folklore, though most considered them boogeymen and stories meant to scare children.  Though evil creatures control the world, few mortals realize it.

Finally, the brothers were cornered by a group of clerics and magicians that serve a good god (a group dedicated to freeing the world from the secret control of demons).  They were banished, but the spell to banish them simply dropped them on the streets of Portshire. They have been mostly good since arriving in Cross, trying to understand this new world before they start causing trouble. 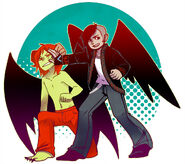 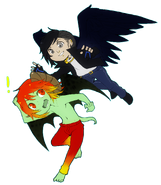 jack and scrae by tete 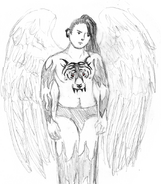 jack and scrae by ante

Jack in his armor 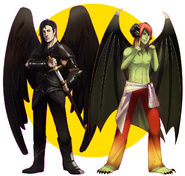 Jack and Scrae getting ready to fight!
Add a photo to this gallery
Retrieved from "https://themesh.fandom.com/wiki/Scrae_and_Jack?oldid=4176"
Community content is available under CC-BY-SA unless otherwise noted.